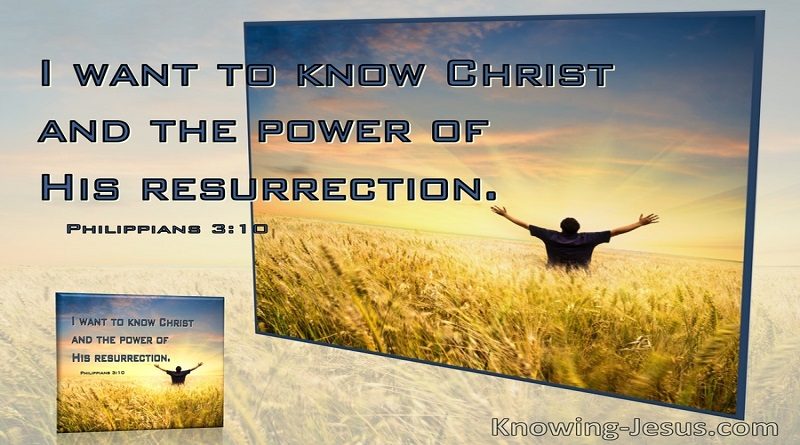 The Resurrection of our Lord and Saviour Jesus Christ is the sum and substance of the Christian faith.

Remember, It’s an undeniable established historical truth that turned the world upside down.

Without the resurrection of Christ there is no Christianity at all…

Now, how many of you believe that resurrection is an event that has had happened in the past during Jesus ministry on earth, promised in the Old testament too and will also occur when Christ descends from heaven to receive his bride.

When Jesus told Martha comforting her, “Your brother(Lazarus) would rise to life.”

Martha surely believed in the resurrection but she said, “Yes Lord, I know that he will rise on the Last day.”

But then Jesus makes this unique, profound and matchless statement anyone could ever imagine of, “I am the resurrection and the life. He who believes in me will live, even though he dies;and whoever lives and believes in me will never die. Do you believe this?”

Jesus almost blows her mind and the mind of the readers. What he actually wanted to tell Martha and us is that

Jesus is the resurrection. He is the very source and Person of Resurrection.

Now, mark this next statement :-

” Martha was thinking that resurrection was a certain future possibility but Jesus meant that it’s a present reality. And the same reality was standing before her. He is the reality. “

It’s the same with every born – again believer in Christ. Read the next verses :-

” And what is his incomparably great power for us who believe. That power is like the working of his mighty strength,which he exerted in Christ when he raised him from the dead and seated him at his right hand in the heavenly realms,1:21far above all rule and authority, power and dominion, and every title that can be given, not only in the present age but also in the one to come.” (Eph 1:19-21)

The resurrection power of Jesus Christ resides inside every child of God. The greatest evidence to this truth is the changed and transformed lives of every christian who has surrendered his life to the crucified, buried and risen Christ as their only Lord and Saviour.

Even at the point of our baptism we acknowledge this truth because if you read Romans 6 you would know that baptism signifies the fact that our old sinful life has been buried with Christ (Immersion in water) and we are raised to new life just as Christ was raised from the dead to the glory of The Father (Emerging from water)…..

So, today believe that the same resurrection power of Christ can give you new hope, heal your broken hearts and bodies, set you free from any addiction, bring new provision, new strength and give you a fulfilling and satisfying life….

Just like Apostle Paul who made it the prime aim of his life until the end(Phil 3), Ask the Lord to give you a brand-new experience of the Resurrection power by his Holy Spirit….

The Lord just asks you a simple question today as he asked Martha.

If you simple believe you will see the glory of God.