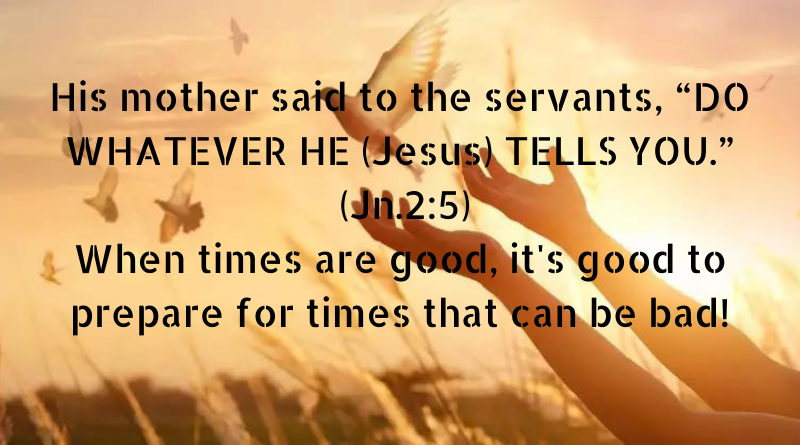 The seven years of abundance in Egypt came to an end, & the seven years of famine began, just as Joseph had said. … When all Egypt began to feel the famine, the people cried to Pharaoh for food. Then Pharaoh told all the Egyptians, “Go to Joseph & DO WHAT HE TELLS YOU.” When the famine had spread over the whole country, Joseph opened all the storehouses & sold grain to the Egyptians, … And all the world came to Egypt to buy grain from Joseph, because the famine was severe everywhere.

– GOD was in Joseph & Joseph was in Egypt, & that indeed made all the difference!

– When all others were busy enjoying ‘abundance’, Joseph & his team were busy preparing to be a blessing in days of ‘scarcity’.

– God gives responsibilities that can be handled just well enough! Be prepared for the bad..

Every good and perfect gift is from above, coming down from the Father of the heavenly lights. James 1:17)

His mother said to the servants, “DO WHATEVER HE (Jesus) TELLS YOU.”

When times are good, it’s good to prepare for times that can be bad!