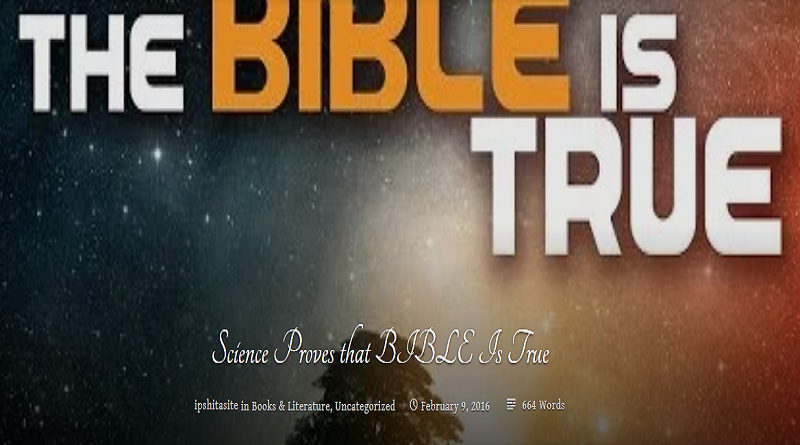 ” The fool has said in his heart, There is no God “

Scientific inventions and discoveries like Cable TV, Cell phone, Satellite and Super Computer make many people especially youngsters in the 21st century to doubt the very existence of God.

” Science or The Holy Scriptures? ” is a question that constantly challenges the mind.

The Bible is not against science rather the Bible agrees with true Science. The Bible abounds in scientific facts. It declares that the world is round(Isaiah 40:22). Even thousands of years before, the Bible has stated that the earth hangs on nothing(Job 26:7). We have learned from the Bible the Scientific facts such as the stars in the sky cannot be numbered(Gen 15:5), and there is oil in the valley of Siddim(old name for Arabia) (Gen 14:10). The Bible has also mentioned that iron is taken from earth (Job 28:2) and that molten glass is cast into moulds

(Job 37:18). Surely the Lord God Almighty who created the heavens and the Earth knows all about this and has recorded all these things in his holy and living word.

Many Eminent Scientists believed in the Bible.

Galileo an Italian mathematician and physicist, proved that the sun rotates on its axis. He was a serious student of the Bible and sought to uphold the absolute authority of Bible as the word of God.

Johannes Kepler was perhaps the greatest astronomer of all time and a brilliant mathematician. His three laws of planetary motion were discovered without the use of telescopes and without the benefit of modern mathematics. It is quite amazing about how he accomplished this great feat. He is known to have written many books on Christianity.

Robert Boyle is often called the Father of Modern Science. Boyle was the first to differentiate an element and a compound. He stated repeatedly that his whole purpose of scientific experiment and investigation was to demonstrate the reasonableness, authenticity and harmony of the scriptures with natural law and principles.

Isaac Newton, the greatest scientific mind of all history, discovered the law of gravitation. He developed calculus and invented the reflecting telescope. He said, ” The authority of the Prophets is divine, and no power on earth is authorised to alter what they wrote. “

No one could destroy the faith and love these brilliant men had for God and his Bible. The more they researched on scientific subjects the more they revered the Sovereign Saviour!

As the Bible rightly says, ” The fear of the Lord is the beginning of wisdom “. So, was it demonstrated in the life of these great men.